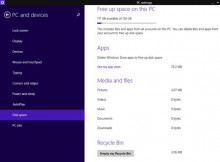 While we have reported that the upcoming Windows 8.1 Update 1 will offer users better access to the OS with a keyboard and mouse configuration, there will apparently be some improvements for touchscreen-based PC owners as well. Winsupersite has found a revamped Disk Space feature in the recently leaked build of Update 1 that should make it easier for users to manage their Modern apps and storage space with a touch-oriented UI.

Story added 6. February 2014, content source with full text you can find at link above.