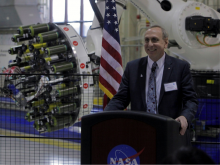 NASA Administrator Charles Bolden has named Steve Jurczyk as the agency’s Associate Administrator for the Space Technology Mission Directorate, effective Monday, March 2. The directorate is responsible for innovating, developing, testing and flying hardware for use on future NASA missions.

Jurczyk has served as Center Director at NASA’s Langley Research Center in Hampton, Virginia, since April of 2014. An accomplished engineer, he previously served as the deputy center director and in other leadership positions at the center prior to his appointment as center director.

Story added 24. February 2015, content source with full text you can find at link above.