CIA puts the digital revolution at the core of its mission 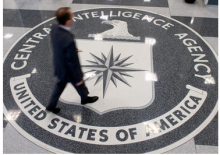 Every Silicon Valleyite’s favorite buzzword — innovation — has been picked up by the CIA.

The Central Intelligence Agency announced publicly on Friday that — as part of one of the largest agency makeovers since its founding in 1947 — it’s creating a new top-level directorate called the Directorate of Digital Innovation.

Read more: CIA puts the digital revolution at the core of its mission