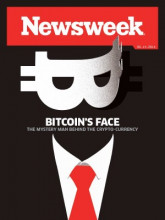 Newsweek made a splash today with its cover story claiming it had found Satoshi Nakamoto, the elusive creator of Bitcoin. Even Nakamoto’s family, some of whom were interviewed by Newsweek, didn’t know about his invention.

“I am no longer involved in that and I cannot discuss it,” Nakamoto told the Newsweek writer, confronted outside his home in Temple City, California.

Story added 7. March 2014, content source with full text you can find at link above.