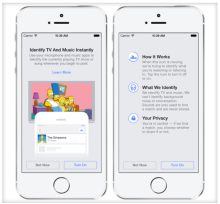 The head of Facebook’s US-based Security Infrastructure team has defended a recent app update that uses a smartphone’s microphone for Shazam-like audio recognition.

The feature was announced at the end of May, and was expected to roll out within weeks. Allowing Android and iOS users to “identify TV and music instantly,” the app is capable of recording ambient sounds in the user’s environment to recognise what show is on the TV or what song is playing.