Douglas Engelbart, inventor of the computer mouse, has died 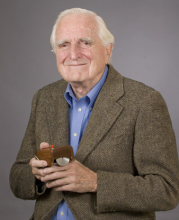 Douglas Engelbart, a Silicon Valley engineer who invented the computer mouse and is credited with many of the concepts that underpin modern computing and the Internet, died on Tuesday at his home in Atherton, California. He was 88.

Born in 1925, Engelbart was coming of age as World War II raged in Europe. He joined the U.S. Navy as an electronic and radar technician, and after the war studied electrical engineering at Oregon State University. He went on to complete a master’s degree and Ph.D. at the University of California at Berkeley, where he was also an assistant professor.

Story added 4. July 2013, content source with full text you can find at link above.