Deep Dive into the HikaShop Vulnerability

It’s been two months since our disclosure of an Object Injection vulnerability affecting versions <2.3.3 of the Joomla! Hikashop extension. The vulnerability allowed an attacker to execute malicious code on a target website.

How Does Object Injection Work?

Object Injection occurs when raw user input is passed to an unserialize() function call. When this happens, someone with malicious intent can send a serialized instance of a class known in the current application’s context, ensuring that at least one of these class’s defined as magic methods will be executed at some point in the code.

The two points of interest here are lines 124 and 132. In this instance, the $infos variable is set to JRequest::getVar()‘s return value, this means it can either take $_GET[‘infos’] or $_POST[‘infos’]‘s value. It then decodes $infos‘s content using base64_decode() and passes it to the unserialize() function.

With this information in hand, we set out to building a valid payload that would allow us to abuse the function in question. In our Proof of Concept (PoC) we set out to abuse the Joomla! 3.3.x classes and defined success by pulling the webservers /etc/passwd.

Building the Payload – Finding a Pivot

The first thing we need to do is control the applications’s execution order and we need to do it using the Joomla! classes magic methods. A popular one is PHP’s class destructor method, __destruct(), as it is automatically executed during the script’s shutdown sequence.

In this specific case, we chose JDatabaseDriverMysqli class’s destructor as it fit our needs: it allows us to call methods from any classes available.

It would call the disconnect() method:

Which is designed to call every callback function within the $this->disconnectHandlers variable: 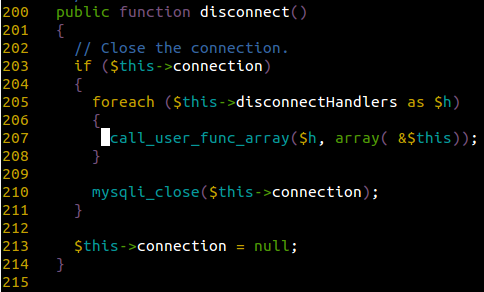 We prepare the attack by creating a modified version of the JDatabaseDriverMysqli class, allowing us to modify some the variable default values. More specifically, we need it to meet a few criteria so that its serialized counterpart, once unserialized by Hikashop, spawns an instance whose destructor will execute any function/method we feed it with.

To accomplish the above we need to:

We can’t control what arguments are sent to our target function (it will always be our class’s instance). This limits our research of potential methods to those matching one of these conditions:

Using a few grep commands, we across the following method in the PHPMailer class:

Should be easy no? Sending an instance of PHPMailer modified in order to set $this->PluginDir to some arbitrary location should do the trick (and give us a cool LFI/RFI attack vector along the way, imagine if we set $this->PluginDir was set to http://blog.sucuri.net/)! Unfortunately for us, two things prevented us from directly going that way.

That’s quite a big problem, we can’t do much about it, right? Wrong! Fortunately for us, Joomla! uses some pretty neat class auto-loading mechanisms, basically allowing us to automatically load the JMail class which is importing PHPMailer in the process.

To solve this issue we created an instance of JMail in any of the JDatabaseDriverMysqli‘s variables we didn’t use. Doing so would force the autoloader to load JMail‘s file and thus, load PHPMailer‘s definition at the same time.

Problem #2 – The SmtpSend() Method is Defined as “Protected”, Preventing External Use

That one wasn’t much of a problem: if you can’t call SmtpSend() directly, find and call another publicly available method that does it for you! Again, fortunately for us, such a method existed!

The only additional actions needed to use this method instead is to set $this->Mailer to smtp!

Not really. While we definitely do have some kind of working Local File Inclusion/Remote File Inclusion (LFI/RFI) going on, we’re still far from our initial target: Putting a backdoor in the website’s root directory by sending a single request.

Yes, we could’ve used our RFI to include remote files and work it out from there. The problem with this possibility is that it needs the website’s server to have the allow_url_include option set to On, which is not the case by default.

We were in need of another way to get the same thing done, but locally.

Sendmail to the Rescue!

Some of you might have noticed in our previous screenshot that another method is available within PostSend() which is $this->SendmailSend().

Looking at it revealed a very interesting way to write files at a known location on the target’s server.

Both are sanitized using different functions: escapeshellcmd() and escapeshellarg(). Using $this->Sendmail (escaped by escapeshellcmd()), the following special characters are escaped: #&;`|*?~^()[]{}$\, \x0A and \xFF, which basically leaves us with alphanumeric characters and a few others like “/” and “-“.

It’s more than enough for what we want to do! We can add any parameters we want to the original Sendmail command.

My subject is <?php file_put_contents(JPATH_BASE.”/backdoor.php”,”

That’s a lot of questions heh? Here are the answers:

All we need now is to organize all of our bypasses in a way that makes sense and so it does what it’s supposed to!

It’s getting and possibly sounding pretty complicated at this point, so we put together a nice workflow diagram that should hopefully provide you an illustration of what was discussed above. 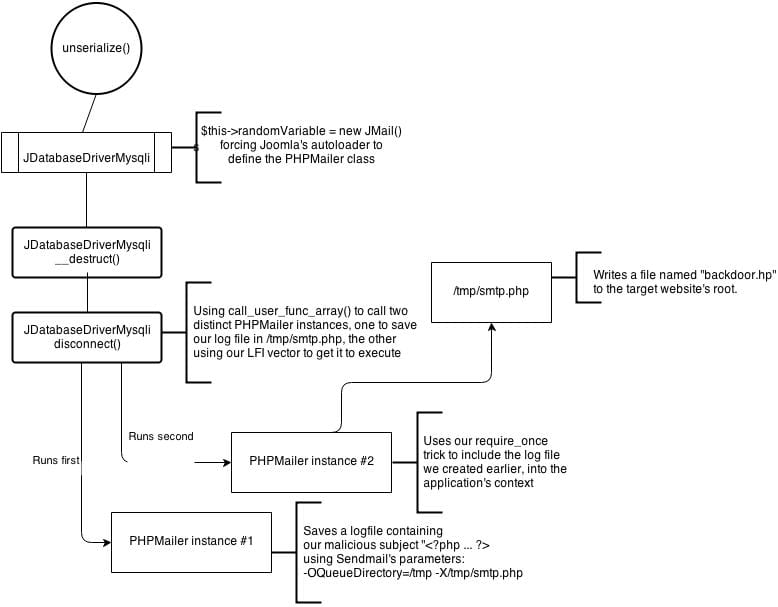 Once an attacker successfully creates and serializes such an object, sending it against a vulnerable Hikashop install, they are able to view the /etc/passwd file.

Story added 17. November 2014, content source with full text you can find at link above.