Lately, Brazil is going through a series of political protests against the current administration and the large amount of over expenses related to the 2014 Soccer/FIFA World cup. When the police started to close down the protesters in the streets, they went online. We won’t go into much more politics, but those online protests recently switched from Twitter/Facebook discussions into a mass defacement of multiple high profiles sites (and Twitter accounts).

It includes the Twitter of the Veja Magazine (with over 2.5m followers – one of the biggest in Brazil): 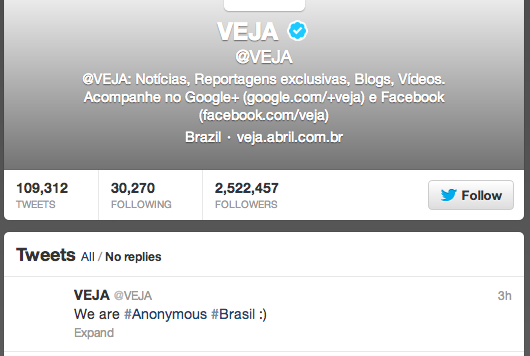 And the site for Brazilian’s richest man, Eike Batista:

And that’s not all, many government sites are getting hacked and defaced as part of the protest. All of them begging for the population to join them in the streets and in front of the soccer stadiums to show their dissatisfaction with what is happening. This is a small list of the ones defaced early today:

We are also seeing some sites suffering from DDOS (denial of service) attacks. We don’t know exactly how those sites are getting hacked, but we will keep monitoring the situation and providing updates as they come. Note that none of the compromised sites were injected to host malware.

Story added 17. June 2013, content source with full text you can find at link above.