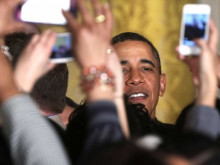 Earlier this year it became illegal to unlock your smartphone or tablet so that you could use it with any carrier you wanted to.

Unlocking a mobile device requires hacking into it to alter the software.

Anyone unlocking a new cell phone or providing unlocking services after Jan. 26 risks up to five years of jail time for each offense. But on Tuesday a government agency that works on behalf of the President stepped in to try to change that. It is asking the Federal Communications Commission to make rules that would sidestep the law.

Read more: You Could Go To Jail For Hacking Your iPhone And Obama Wants To Change That

Story added 18. September 2013, content source with full text you can find at link above.