Wearables Could Soon Know You’re Sick Before You Do 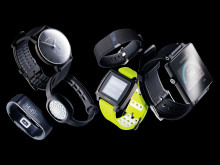 Mike Snyder was clearing brush behind his brother’s western Massachusetts house, erecting a fence to keep deer from the blueberries, when the tick bit him. A few days later, on a flight to Norway with his family, his palms itched and his head grew woozy. So the Stanford geneticist dumped a bunch of wearable sensors on his tray table and began doing what he does best: measuring himself.

Read more: Wearables Could Soon Know You’re Sick Before You Do

Story added 13. January 2017, content source with full text you can find at link above.