The Numbers Don’t Lie: Self-Driving Cars Are Getting Good 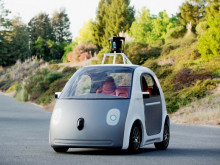 It’s report card time for the automakers and Silicon Valley denizens studying the tricky problem of making cars drive themselves, and everyone is passing.

The California DMV just released its annual slate of “disengagement reports,” documents provided by the 11 companies that received state permits to test autonomous vehicles by the end of 2015. The results, summarized below, reveal how often humans had to wrest control away from the computer, and why (sort of).

Story added 2. February 2017, content source with full text you can find at link above.