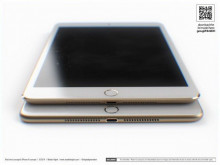 Despite KGI Securities analyst Ming-Chi Kuo’s usually excellent track record on Apple predictions, he messed up his last prediction that the iPad Air 2 would make its appearance at Apple’s iPhone 6 launch event two weeks ago.

Obviously, that didn’t happen. But if you’re eager for an iPad Air boasting an A8 chip, a new report corroborates a rumor we’ve heard before: it’s coming in October. Don’t wait for an A8 iPad mini though: it’s at least three months away.

Read more: The next iPad mini could be delayed til 2015 to differentiate it from the iPhone 6 Plus

Story added 23. September 2014, content source with full text you can find at link above.