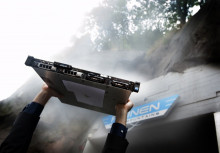 After 10 days and 93 bids, an historic server used to host Wikileaks’ treasure trove of secret documents has sold on eBay — to a 17-year-old who used his dad’s email account without permission.

Swedish ISP Bahnhof, which had hosted Wikileaks for about eight months starting back in 2010, decided to sell the server last week, hoping to raise money for two charities: Reporters Without Borders and the 5th of July Foundation, a digital rights group.

Story added 13. September 2013, content source with full text you can find at link above.