Switzerland won’t save you, either: Why e-mail might still be safer in US 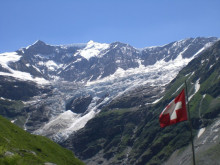 Back when he was still a National Security Agency contractor, Edward Snowden chose the privacy-minded e-mail provider Lavabit for his correspondence. It was from that account that he ultimately divulged his secrets to American journalists. Since Snowden became a household name, Lavabit shut down under legal pressure from a US court to hand over the keys to its kingdom as a way to get at Snowden’s data.

Read more: Switzerland won’t save you, either: Why e-mail might still be safer in US