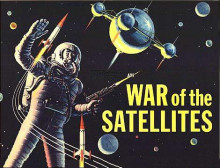 It was an interesting week for ideas about the future of the Internet. On Wednesday, satellite industry notable Greg Wyler announced that his company OneWeb, which wants to build a micro-satellite network to bring Internet to all corners of the globe, secured investments from Richard Branson’s Virgin Group and Qualcomm. Then in a separate announcement on Friday, Elon Musk said that he would also be devoting his new Seattle office to creating “advanced micro-satellites” to deliver Internet.

Story added 19. January 2015, content source with full text you can find at link above.