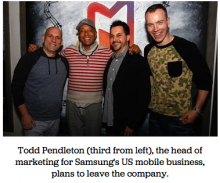 Todd Pendleton, the executive behind Samsung’s successful “Next Big Thing” campaign, is looking for his next big thing — but it won’t be at Samsung.

Pendleton, who has served as chief marketing officer for Samsung’s US mobile business for nearly four years, notified his colleagues this week that he’s leaving in April, people familiar with the matter told CNET. Some of his direct reports have also left Samsung or have been transferred to other departments, the people said. Samsung and Pendleton didn’t immediately respond to requests for comment.