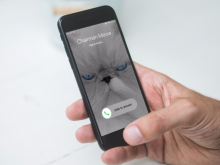 If you send encrypted text messages from your phone, there’s a decent chance you use Signal. Since the app made headlines in 2015 by offering encryption between Android and iPhone, it’s grown in popularity, to the point that it’s now one of the preferred ways to tip The New York Times on a story.

As of today, Signal will do video calls as well.

Story added 15. February 2017, content source with full text you can find at link above.