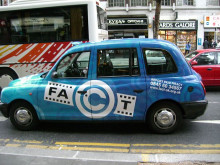 Back in May, police acting on behalf of the Federation Against Copyright Theft sent several police cars to arrest a single alleged movie cammer. But despite allocating significant resources, police have now dropped the charges. However, matters have actually taken a turn for the worse, with the police re-arresting the alleged cammer plus his brother and sister while investigating the online leak of another movie.

Earlier this year we reported on the unusually heavy-handed approach taken by the police who were acting on a tipoff from FACT, the Federation Against Copyright Theft.

Story added 10. September 2013, content source with full text you can find at link above.