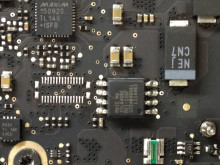 The so-called “Thunderstrike” hardware exploit was publicized late last year, but the hack takes advantage of a flaw in the Thunderbolt Option ROM first disclosed in 2012. Until now, that flaw hasn’t been patched, but according to iMore, the latest beta of Apple’s OS X 10.10.2 update fixes the problem.

Citing people familiar with the software, it was said that OS X 10.10.2 prevents the Mac’s EFI boot ROM from being replaced, and also makes it impossible to roll it back to a previous state.

Story added 27. January 2015, content source with full text you can find at link above.