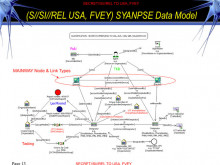 Since 2010, the National Security Agency has been exploiting its huge collections of data to create sophisticated graphs of some Americans’ social connections that can identify their associates, their locations at certain times, their traveling companions and other personal information, according to newly disclosed documents and interviews with officials, an investigation by The New York Times has revealed.

Story added 30. September 2013, content source with full text you can find at link above.