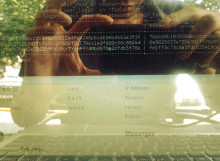 Six years ago, two Microsoft cryptography researchers discovered some weirdness in an obscure cryptography standard authored by the National Security Agency. There was a bug in a government-standard random number generator that could be used to encrypt data.

The researchers, Dan Shumow and Niels Ferguson, found that the number generator appeared to have been built with a backdoor — it came with a secret numeric key that could allow a third party to decrypt code that it helped generate.

Story added 9. September 2013, content source with full text you can find at link above.