Newegg trial: Closing arguments wrap up, verdict is near 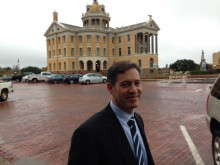 The TQP Development v. Newegg trial has ended, and the case is now in the hands of an eight-person jury here in Marshall.

TQP claims that a patent invented by a man named Michael Jones covers a vast swath of the Internet: any website, in fact, using the common encryption combination of SSL combined with the RC4 cipher. The patent-holding company owned by Erich Spangenberg, derided by its critics as a “patent troll,” has collected $45 million from 139 companies. Online retailer Newegg won’t pay and has pushed the case to a jury.

Story added 26. November 2013, content source with full text you can find at link above.