New supercomputer uses SSDs instead of DRAM and hard drives 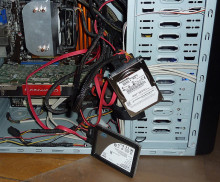 A new supercomputer being deployed this month in the U.S. is using solid-state drive storage as an alternative to DRAM and hard drives, which could help speed up internal data transfers.

The supercomputer, called Catalyst, will be deployed at Lawrence Livermore National Laboratory in Livermore, California. Built by the U.S. Department of Energy, Cray and Intel, the supercomputer delivers a peak performance of 150 teraflops and will be available for use starting later this month.

Story added 5. November 2013, content source with full text you can find at link above.