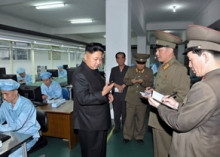 North Korea, one of the most isolated and censored societies on the planet, has unveiled what it says is a domestically-produced smartphone.

Industry analysts say the “Arirang”, built around Google’s Android OS, is likely manufactured in neighbouring China, however. The existence of the phone, named after a famous Korean folk song, came to light during a factory inspection by North Korean leader Kim Jong-Un at the weekend.

Story added 13. August 2013, content source with full text you can find at link above.