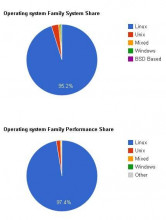 While Linux fans and critics obsess about Linux’s failure to sweep Windows off the desktop, they’re ignoring that Linux is winning everywhere else, and that when it comes to the highest of high-end computing, Linux rules.

Driving the point home, the top 10 fastest supercomputers all run Linux of one sort or the other. You have to go the way to the 44th fastest computer, the European Centre for Medium-Range Weather Forecasts box, which runs IBM’s AIX Unix variant, to find one that doesn’t run Linux.

Story added 21. June 2013, content source with full text you can find at link above.