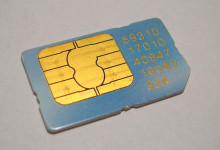 Karsten Nohl, the security researcher who broke into SIM cards with a single text, has told The Register he is dismayed by the mobile industry’s lukewarm response to his revelations – and has revealed, for the first time, exactly how he did it.

Nohl thought exposing the flaws in SIM security would force the telcos to fix them. Theoretically, the two flaws would have worked in tandem to intercept calls and threaten the security of wireless NFC applications – such as pay-by-wave and other contactless payments.

Story added 24. September 2013, content source with full text you can find at link above.