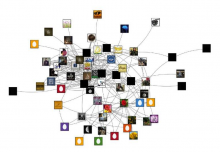 Designated terrorist groups have reportedly long used social media to communicate. Al Qaeda and the Taliban have been believed to frequent Facebook, and Hamas has been a well-known devotee of Twitter.

Now, the Islamic State of Iraq and Syria, or ISIS, is thought to also be quite active on social networks. In fact, ISIS supporters are believed to have operated at least 46,000 Twitter accounts between September and December 2014, according to a new study (pdf) released this week by the Brookings Institute think tank.

Read more: ISIS spread its reach through Twitter with 46,000 accounts