Is the Linux Foundation trying to gag Linus Torvalds? 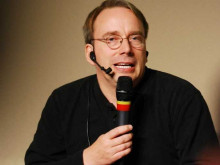 Linus Torvalds, the inventor of the Linux operating system, is a bona fide genius. He’s also a regular guy, and not nearly the kind of monster he’s been made out to be.

But he doesn’t suffer fools, he loves four-letter words, and has a huge sense of humor. And that combination has gotten him into increasing amounts of hot water over the years. To which he’s mostly responded with the kind of color he’s known for.

Story added 12. March 2015, content source with full text you can find at link above.