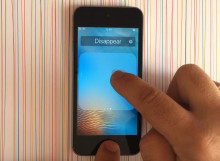 While Apple is still working on an official method of dealing with unwanted default apps in iOS, a glitch in iOS 9 through 9.2 will let people temporarily push them out of sight.

As seen in the video below, users have to move the unwanted apps into a folder, and then drag them as far to the right as possible, beyond any and all of the folder’s tabs. With an app still suspended “mid-air,” hitting the Home button simultaneously will cause it to vanish.

Story added 4. January 2016, content source with full text you can find at link above.