How the US government inadvertently created Wikileaks 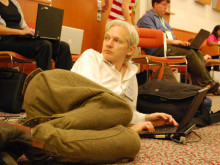 I was in Germany for Chaos Congress 2009, a hacker conference, and after attending a series of talks I was headed back to my hotel when I spotted Julian Assange. This predated my working as a project manager at DARPA as a hacker-in-residence, if you will. It was also before Wikileaks released the video “Collateral Murder” and hundreds of thousands of diplomatic cables, the Swedish rape allegations, and Julian ending up a virtual prisoner, holed up in Ecuador’s diplomatic mission in London.

Read more: How the US government inadvertently created Wikileaks

Story added 17. September 2013, content source with full text you can find at link above.