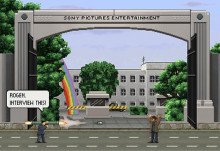 The studio says that hackers destroyed game data and locked the company out of its computers, making it tough to both continue work on the dictator-inspired side-scroller and maintain a crowdfunding drive for the title. The funding goals weren’t likely to be met as-is, for that matter.

Story added 19. January 2015, content source with full text you can find at link above.