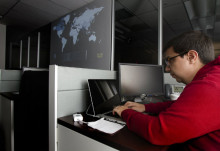 Energy companies faced more targeted malware attacks in a six-month period last year than businesses in any other field, with hackers sometimes breaking into systems to steal geologic and financial data, according to a Houston network security firm’s research.

Alert Logic is releasing a report Tuesday detailing the incidence of attacks on its customers in different industries and the digital weapons hackers used in their attempts to infiltrate systems from April 1 to Sept. 30 last year. FuelFix examined the report ahead of its general release.