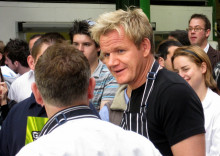 He’s known for his temper, so it’s no wonder that a family feud involving Gordon Ramsay is nothing less than a battle royale. On Tuesday, the famous(ly potty-mouthed) Michelin-starred chef took a step closer to justice at the expense of several of his in-laws. His father-in-law and three other members of the clan have been charged by the Met police with regard to computer hacking allegations that are now seven years old.

Story added 22. February 2017, content source with full text you can find at link above.