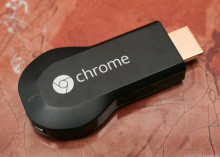 Google is unleashing its Chromecast video streamer in Europe today, nearly eight months after it debuted in the US. Costing just £30 ($50) in the UK or 35 euros elsewhere, it’s cheaper than its competitors such as Apple TV or the Roku Streaming Stick, although currently there’s less to view in Europe.

The 2-inch dongle plugs straight into an HDMI port on a TV and streams video from YouTube and Netflix along with Google’s own music and movie services. In the UK, it will also support the BBC’s iPlayer.

Story added 19. March 2014, content source with full text you can find at link above.