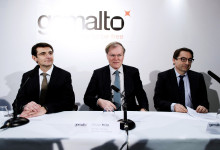 Gemalto, the Dutch maker of billions of mobile phone SIM cards, confirmed this morning that it was the target of attacks in 2010 and 2011—attacks likely perpetrated by the NSA and British spy agency GCHQ. But even as the the company confirmed the hacks, it downplayed their significance, insisting that the attackers failed to get inside the network where cryptographic keys are stored that protect mobile communications.

Read more: Gemalto Confirms It Was Hacked But Insists the NSA Didn’t Get Its Crypto Keys

Story added 26. February 2015, content source with full text you can find at link above.