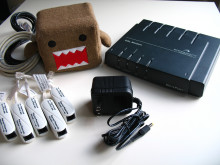 Now a French researcher has discovered a series of wireless flaws on DSL modems from Linksys, Netgear and other vendors, which effectively gives attackers administration level access by simply resetting the modem’s configuration settings, so bypassing the firewall settings of the unit.

Story added 6. January 2014, content source with full text you can find at link above.