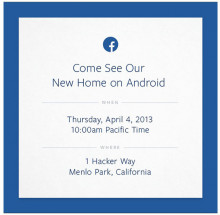 In a highly suggestive invitation to an April 4 event sent out on Thursday, Facebook welcomes media to “Come See Our New Home On Android,” hinting the social networking monolith will finally reveal a much-rumored purpose-built operating system.

Citing sources familiar with the matter, TechCrunch says the Facebook OS will be a platform built on Android, with deep integration possibly baked into an HTC-manufactured smartphone. Speculation of a true Facebook-developed phone have been floating around for some time, though such a device has yet to appear.

Story added 29. March 2013, content source with full text you can find at link above.