DarkMatter Secure Android May Run on Your Phone 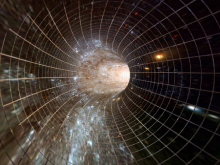 Do you want to use a secure smartphone, but not look like you’re using a secure smartphone? A team of researchers are developing a version of Android called DarkMatter that could turn mainstream Android phones, such as the Galaxy S4 and the Nexus 5, into high-end security devices.

Read more: DarkMatter Secure Android May Run on Your Phone

Story added 20. October 2014, content source with full text you can find at link above.