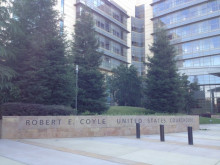 On Monday, a federal court in Central California sentenced a 26-year-old to one year and nine months in prison for firing two different laser pointers at a Kern County Sheriff’s Office helicopter over a six month period in 2013.

The man, Brett Lee Scott of Buttonwillow, took a plea deal with federal prosecutors according to a May 5, 2014 court filing. Scott explained his actions by saying that he was “bored.”

Story added 5. August 2014, content source with full text you can find at link above.