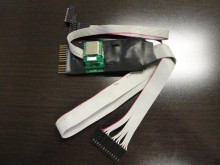 Thirteen suspects have been indicted in New York on a gas station skimming scheme that netted them more than $2 million, according to court documents.

The skimming devices, placed on card readers at gas station pumps throughout the southern U.S., recorded credit and debit card data, as well as PINs, which the thieves then used to withdraw more than $2 million from ATMs. They then tried to launder the money through at least 70 different bank accounts, according to the district attorney’s office in New York County.

Story added 22. January 2014, content source with full text you can find at link above.