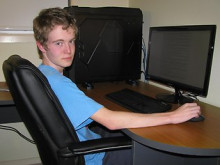 Griffin Francis, a 19-year-old from Coffs Harbour on the New South Wales north coast, hasn’t got a full time job but has earned thousands hacking into tech giants Google, Mozilla, Apple, Microsoft and Adobe, then tipping them off about flaws in their security systems.

“I think of what they haven’t done and about finding means to bypass that,” said Mr Francis, who is studying a diploma in information technology.

Story added 27. May 2013, content source with full text you can find at link above.