Are your smartphone apps selling you out? 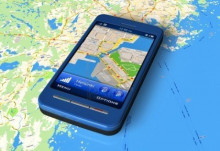 The president of the United States says he’s not “allowed” to own an iPhone, which is why he’s sticking with his BlackBerry, according to The Wall Street Journal.

It’s a politically sensitive subject because the iPhone is the big American brand, and the president is a self-proclaimed fan of the late Apple founder and CEO Steve Jobs. He’d love to pander to buy-America voters. (Obama is also probably not “allowed” to have an Android phone.)

Read more: Are your smartphone apps selling you out?