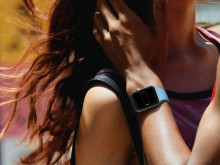 “Bono really should ask Tim Cook about the Apple Watch’s battery life.” I tweeted that yesterday during the U2 frontman’s awkward vaudeville routine with Cook onstage Tuesday at Apple’s biggest event in years. We were clearly moments away from its end and we hadn’t been told how long the company’s first wearable will run on a single charge. Expected battery life was a glaring omission in an otherwise impressive parade of features and specs.

Story added 11. September 2014, content source with full text you can find at link above.