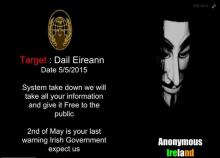 The Irish Government says it has “several security systems” in place to deal with an ‘Anonymous’ hacking group threatening to infiltrate the Dail’s IT system.

A message to the Irish government, posted on the ‘Anonymous Ireland expect us’ Facebook page, says it plans to “take down” the encrypted IT systems next month.

It claims it will then steal highly sensitive information and distribute it to the public free of charge. The threatening post says the group’s target is “Dail Eireann”, while warning that “All Dail’s information will be free to you.”

Story added 3. April 2015, content source with full text you can find at link above.