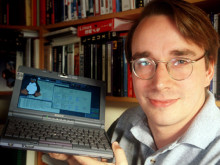 Twenty-two years ago Linux was born as a “(free) operating system” that founder Linus Torvalds was quick to downplay as “just a hobby” that wouldn’t “be big and professional.” My, but how times have changed. So much so that Linux now dominates mobile (Android), servers and cloud. No wonder that Microsoft CEO Steve Ballmer derided Linux in 2001 as a “cancer” that “attaches itself… to everything it touches.”

He was right. At least, as it relates to Linux’s effect on Microsoft.

Story added 2. September 2013, content source with full text you can find at link above.