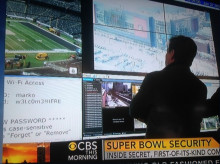 During the pre-game coverage for NFL Super Bowl XLVIII, television news inadvertently broadcast the stadium’s internal Wi-Fi login credentials, which were in plain sight on an enormous, unmissable, wall-mounted monitor inside a command center.

The Wi-Fi credentials, which have likely been changed as news of the security gaffe has spread like wildfire on Twitter and community blogs, had “marko” as the login, and a pseudo-leet speak variation of ‘welcome here’ as the password.

Patrick Wardle drops new zero-day doom for Zoom (1.4.2020)
Attackers can use Zoom to steal users’ Windows credentials with no warning (1.4.2020)
You might want uninstall Houseparty, expert calls it a privacy ‘trojan horse’ (1.4.2020)
Microsoft warns hospitals about VPN cyberattacks during coronavirus (1.4.2020)