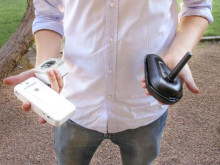 A new class of apps and wireless devices used by private pilots during flights for everything from GPS information to data about nearby aircraft is vulnerable to a wide range of security attacks, which in some scenarios could lead to catastrophic outcomes, according to computer scientists at the University of California, San Diego and Johns Hopkins University. They presented their findings Nov. 5 at the 21st ACM Conference on Computer and Communications Security in Scottsdale, Ariz.

Story added 11. November 2014, content source with full text you can find at link above.