Prepare for a second wave of Touch Bar-friendly Mac apps 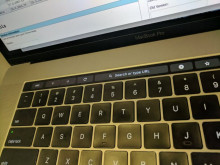 Big software companies like Adobe, Google, and Microsoft have all begun modifying their most widely used applications to include support for the Touch Bar display on Apple’s latest MacBook Pro laptops. Some indie developers have done the same thing.

But many, many Mac apps don’t let you do anything with the Touch Bar, five months after Apple unveiled its 2016 MacBook Pro and introduced tools and guidelines to help developers build for its Touch Bar. That’s about to change.

Story added 13. March 2017, content source with full text you can find at link above.