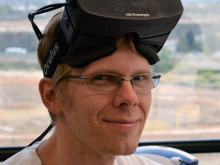 John Carmack, co-founder of id Software and current CTO of Oculus, has weighed in on the Internet’s … shall we say “mixed” reaction to the news of Facebook purchasing the virtual reality-oriented company. Carmack responded to a post titled “Wrong and Right Reasons To Be Upset About Oculus” on Anamanaguchi lead songwriter Peter Berkman’s Tumblr page, noting that, while he was not involved in the negotiations with Facebook, he has “reason to believe that they get the Big Picture as I see it, and will be a powerful force towards making it happen.”

Story added 31. March 2014, content source with full text you can find at link above.