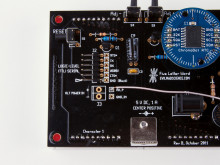 A burglary suspect currently on trial in Johnson County, Kansas allegedly put a GPS tracking device on a victim’s car to determine whether anyone was home. The victim, an unnamed Overland Park woman, told her story to the Kansas City Star on Friday. Overland Park police, Leawood police, and Johnson County prosecutors declined to comment on the GPS allegation to the newspaper.

Story added 29. April 2013, content source with full text you can find at link above.